Today’s author is a little bit different from what you’ll usually see around here. She’s here to celebrate the release of her first novel, The Holder’s Dominion, but she’s already a highly sought after speaker at some of the world’s most exciting conventions and a successful video game columnist. She’s even written some background lore for video games. As someone who actively daydreams about working in the world of video games I’m totally geeking out about this interview and I hope you will too.

Please give Genese a warm welcome!

I’d love to! Thank you so much for asking. The Holder’s Dominion began as a tiny seed of an idea back in 2009. I discovered a fire in my belly to unite the people in my life and I thought there was no better way to do that than through storytelling! Today, Holder’s Dominion is here and has been heralded as a breakthrough novel and a story that is debunking stereotypes and forging a bright and adventurous trail for the new adult genre. Unlike, young adult, where the characters in a story are in high school, I love that Holder’s Dominion allows the reader to immerse themselves in that pivotal time in our lives when we’re plunging into a new life at a university or a new career or relationship in the “new adult” age range of 19-22.

Here’s a sneak peak of the synopsis of the novel:

The Holder’s Dominion is a speculative thriller with a fantasy twist. It’s a story about a young woman who discovers gaming while facing some serious problems online and off. Guided by her friends, college sophomore Kaylie Ames signs on to the massively popular online game Edannair. There she discovers a world of beautiful vistas and magical creatures. But a real-world evil threatens the players: the mysterious Holder, leader of the elite team known as Sarkmarr, is coercing his followers into traumatic offline dares known as “morphis assignments.” To save her friends, Kaylie must infiltrate Sarkmarr and survive the Holder’s tests. But will she find the courage there to keep her own family from falling apart?

First came the idea of our hero Kaylie going up against the villain, The Holder. I could envision Kaylie taking on this mysterious hacker and through her mission she’d discover pivotal details about herself and the people in her life. Personally, I also needed to write this story because it was a way for me to pour my own fears and detrimental traumatic experiences I’d survived into the plots and subplots of the story. It was very cathartic in a way to write Holder’s Dominion.

I also felt that this story was truly needed in the world. My hope when writing this book was to encompass all the little details that make playing an online game so thrilling, life-changing, and engaging. Hence, many parts in the story came from actual player experiences (my own or other players’). While playing alongside fellow gamers, I adapted our experiences into Holder’s Dominion. Players were the driving force that inspired ideas for how Edannair (the online game in my novel) could come alive. Beyond that, the novel’s virtual world of Edannair shows what I hope we can look forward to in next-gen online games. It was really exciting creating an online game that incorporated new game elements. Even though some of the technology I added to Edannair hasn’t been fully developed, I think we’re on the cusp of inventing the same kind of AI found in Holder’s online world.

There were many nights of “marinating” the idea of Holder’s before I started writing it. It was a bit nerve-racking finally deciding to dive in and begin the novel. I had to convince myself in a way to take on the challenge. After that I started writing the scenes I knew would be influential in the story and then I would research various subjects in between writing these initial scenes. It takes dozens of team members to create huge online video games so writing and creating a game for the gaming scenes in the book was extremely daunting. But I relied on the decade of experience I had playing online games and the countless years I’ve had working alongside video game developers to help me construct a core outline.

I do think it’s natural and normal to feel like you’re in a rut sometimes with your writing. So, yes, I do believe blocks exist in any kind of creating. The brain needs time away from complicated projects to rejuvenate and get ready for the next stretch session. Putting your writing away for a day or two and coming back to it really helps refresh your perspective. Also, taking time to peruse artwork, read other books, watch movies, or play video games can help get you out of a creative rut. I’d also love to discuss sometime how beneficial a writing producer can be. This is a position my partner, Eric Kieron Davis, invented where the writer works closely with a producer on writing projects. The producer helps the writer with logistics, mini-goals, stretch goals, creative input, and even blocks when they come up.

Working in solitary confinement is probably the most difficult part for me when writing novels. However, working with editors is one of my favorite parts of the writing process and it is a great solution from those lonely moments.

Writing columns for games is a blast and I am so thankful to have the opportunity to do so. It all started from interviews I had about Holder’s Dominion with editors and columnists in the video game industry. They really liked my perspective and positive attitude and offered an opportunity to contribute to their work. You can find a lot of my columns on MMORPG.com

Oh wow! That’s a tough question to put my finger on. Hmm. I’ve really enjoyed doing panels for prominent conventions around the country especially because after surviving traumatic acts I had lost complete trust in the world. I wasn’t able to go outside my home to walk my dog or go to the grocery store because I was struck with such fear and I’d lost all confidence in myself. I felt I had no voice. To go from struggling to have a conversation with more than one person at a time to talking on stage to audiences of thousands is a really cool feeling. It feels like I’ve found a way to live normally again. Or as close to it as possible, hehe. 😉

I would love love love to sit down with China Mieville someday and hear about his inspiration behind his novels. His writing is smart, captivating, and so interesting. His style often makes me gape in amazement.

Invest in your work. And what I mean by that is go above and beyond to save away enough money to hire professional editors. Professional editors will give you the best feedback and ways to improve your writing and your manuscript.

I would love to meet fellow book lovers, creators, readers, and people of all fandoms and passions. For the last few years I have been speaking at events such as the San Diego Comic Con and Wizard World Comic Cons. Continuing this year, I will be speaking at more events and signing books in St. Louis, Philadelphia, Sacramento, Chicago, Albuquerque, Tulsa, and Austin. If you are near any of those cities, please stop by and say hi and grab giveaways from my table! All my appearance dates can be found on my website www.GeneseDavis.com or you can see all my live updates on Twitter @GeneseDavis and on my author Facebook page: Facebook.com/GeneseDavisOfficial

Thank you so much Dianna for having me! It is such a pleasure collaborating with you. You’re a gem!

Thank you Genese for agreeing to do this interview and being willing to share so much of your story with us. I love how unique your path to success has been and I can’t wait to see what you’re going to create next. 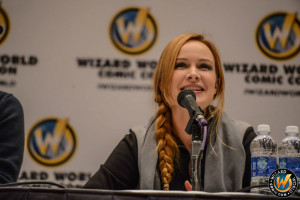 Genese Davis is an American author and host. She is the author of The Holder’s Dominion, a next-generation thriller heralded as a breakthrough novel by Publishers Weekly. Davis’s upcoming works include a new fantasy novel, a sci-fi trilogy, a sequel to Holder’s Dominion, as well as video game lore.

Davis is an in-demand host, speaker, and moderator for conventions such as Wizard World Comic Cons, the San Diego Comic Con, and literary and entertainment expos. Davis hosts web-series and podcasts for ConRadio, Assembly of Geeks and MMORPG.com.

Davis is also a featured video game columnist and is the founder of The Gamer In You. She was awarded the iGR Woman of the Year for her outstanding efforts in debunking stereotypes and for bringing the video game industry the first new adult, gaming-thriller, The Holder’s Dominion. You can hear her featured video game podcast, The Gamer’s Dominion, produced by Assembly of Geeks and shown on ConRadio.

Blurb for The Holder’s Dominion:

The Holder’s Dominion is a speculative thriller with a fantasy twist. It’s a story about a young woman who discovers gaming while facing some serious problems online and off. Guided by her friends, college sophomore Kaylie Ames signs on to the massively popular online game Edannair. There she discovers a world of beautiful vistas and magical creatures. But a real-world evil threatens the players: the mysterious Holder, leader of the elite team known as Sarkmarr, is coercing his followers into traumatic offline dares known as “morphis assignments.” To save her friends, Kaylie must infiltrate Sarkmarr and survive the Holder’s tests. But will she find the courage there to keep her own family from falling apart?