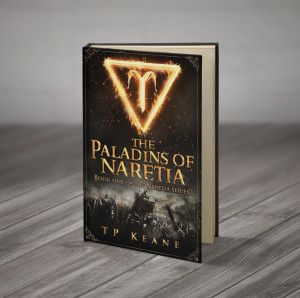 I am thrilled to introduce today’s author, TP Keane, whose fantasy novel The Paladins of Naretia came out on February 28th. I haven’t had a chance to read it yet but between the cover and the blurb I am truly excited to dig deep into this fascinating fantasy.

I could tell you the plot and the characters behind it, but that can be read on the cover of the book. Behind the scenes, however, is a completely different story. While Olórin, an aged wizard, is set the task of saving the kingdom by also saving his adopted son from his rea father, the dark god Dantet, this isn’t the crux of the story. The Paladins of Naretia is about love. It examines, on three fronts, the bravery and destructiveness that love can bring. Firstly, we have the broken love between Dantet and Edwina, the two ruling gods. They are the divorced parents, if you will, caught up in the hatred of each other and using their children, the people of Naretia, as pawns.

Secondly, we have the false love between Olórin and his adopted son, Aramus, who he hopes against all odds will have inherited some humanity from his mother’s side. But Aramus, like Dantet, is incapable of truly loving anything. In the end, Olórin must face the truth of what this means. Our third, but not last, portrayal of love, is true love. Through the novel, we begin to hope, to pray, that Aramus falls in love with the tyrannical queen, Aria, who must put aside her demons to help them. Olórin hopes that love between them would help Aramus stay away from the darkness. But there is only one true love in The Paladins of Naretia, and that is between Aria and her seven-year-old brother Pearan. Her love for him is unconditional and fearless. In the end she will make the ultimate sacrifice to save his life.

If I’m totally honest, it was the world first. You see, I dreamed of Naretia one night, and it wasn’t the fuzzy, warm kind of dream that inspires tales of courage and triumph over evil. It was a very realistic dream where the battle between good and evil teetered dangerously. In it, the outcome of the war seemed to centre around a young man with dark wings and fiery amber eyes. When I woke, I began to wonder what this young man had to do with the downfall of such a fascinating world. This was the spark that lead to the creation of the first book, The Paladins of Naretia.

Very little. Having lived the world in my dream, the story itself, or rather the plot, was already there. The intrinsic details and the character study, however, took more time. Complex is their reasons for being the way they are and even more confounding is the reasons they do not want to be anything else.

4. Can you give us a brief rundown of your writing process?

In everything else I wrote, my usual method is to figure out the here and now of my protagonist, then venture into the “why did that change” and “how did it change things for her/him”. I do this for all of the main characters before I even write a single word. After I have come to realise “the outcome of that change” then I can really get my teeth stuck in. Rarely do I have the outcome until I have written at least half the book and the other characters have come to play.

5. What is the hardest part of the writing process for you and how do you make it easier for yourself?

Honestly, the hardest part is finding the time. As well as being an author, I am also a blogger of books and a mother… which we all know entails a multitude of other jobs like zookeeper of hairless apes, decontaminator of gross things that shouldn’t have lived, and mopper-upper of copious amounts of vomit from said hairless apes.

I don’t believe in writer’s block per say, but I do believe in creative exhaustion where the words you type just don’t come alive anymore. My solution is to abandon all worlds for at least two weeks. Thereafter, begin typing something entirely different and new.

7. I love the name of your kingdom, Naretia. How do you come up with names for places/characters in your world?

Often it was what I heard in my dream. I know it sounds so corny, but it’s the truth and I cannot tell a lie. The name Olórin, however, is a very old Irish name. Seeing as how I’m Irish, I wanted to have a small bit of that in my story. Only after I had settled on it did I realise that Olórin was also the name Tolkien was going to give to Gandalf before he changed his mind. But seeing as how Tolkien got most of his inspiration for his characters from Irish folklore, it didn’t surprise me at all.

8. If you could have lunch with any one author, living or dead, who would it be?

That is the question to end all questions. There are two that stick out in my mind. The first being Douglas Adams, author of The Hitchhikers Guide to the Galaxy, the second being JK Rowling, because who wouldn’t like to pick JK Rowling’s brain?

9. If you could give only a single piece of advice to an aspiring author what would it be?

That if I can do it, so can they. Anyone who knew me as a child, would have never thought that I would publish a book. I would never have thought it either, but my love of story-telling is like breathing to me. It’s something I have to do. So, if I can get around my inability to spell, my lack of experience, the little voice in my head telling me to “not be so stupid and don’t embarrass yourself,” then so can anyone. Self-belief is crucial to following your dreams no matter what they are.

10. What are you working on now that readers can look forward to?

At this very moment in time, I am working on a young adult Science-fiction trilogy called, Kepler One. It’s a story and a world that has gripped me fiercely and is merciless in its honesty and realism. Once book one is done, I will be completing book two of the Naretia series.

Born in Galway, Ireland, (the middle child of seven) it wasn’t much of a surprise to those around her that Trudy was fascinated more with the ancient myths of the Emerald Isle than in the menagerie of other subjects required for school. As practicality had it, however, those stories were only a pastime to be enjoyed around the demands of the “real world”.

Trudy moved to the UK with her husband where she began her career as a student Veterinary nurse. More than three years later, her first son was born and she revelled in motherhood. Her husband’s career brought her firstly back to Ireland (where son number two was born and she worked as an auxiliary nurse) and then to the USA. Trudy loves authors whose talent for writing is only secondary to the quirky characters they imagine, such as Douglas Adams, JRR Tolkien, Jonathan Stroud, Ransom Riggs, John Green and, of course, JK Rowling.

Olórin’s adopted son, Aramus, is a creature unlike any in the kingdom of Naretia. He is feared by all, and holds a darkness inside that is said will end all life by his eighteenth birthday. Olórin must scour the kingdom for godly ingredients to make a potion for Aramus that will save them all. He is hoping his son’s human side will prevail over the rising darkness within him, for long enough to outrun their enemies.

But Aramus’s real father, the dark God Dantet, desires his son’s powers so he might, once again, walk on mortal soil. His legion of dark creatures follow Olórin and Aramus at every turn, trying to kill them. Dantet’s army, however, is not the only one wanting Aramus dead. Something, or someone, changes fate’s hand. Neither Dantet, nor Olórin, can see the terrible future that threatens them all. Even the traitors within the wizard caste are blind to what is coming.

But it is coming.

Buy your copy of The Paladins of Naretia here!

Like this interview? Don’t forget to leave any comments or extra questions in the comments section below!