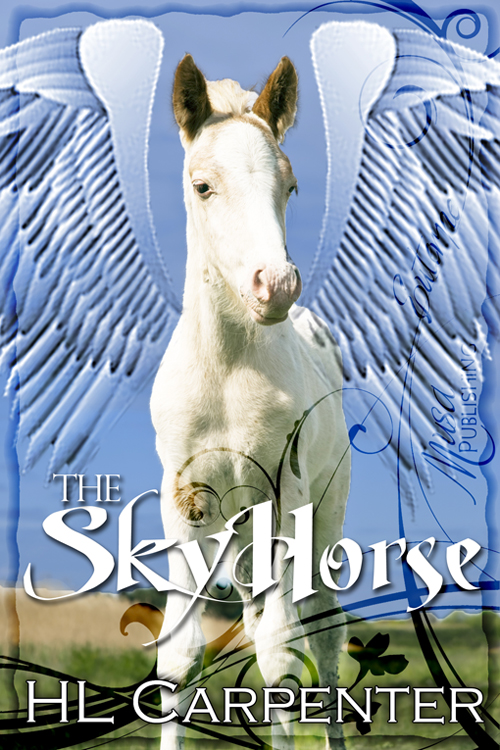 Today’s interview is one of the most interesting I’ve ever had because it’s not just one writer, but two. In fact, it’s a mother-daughter team, Helen and Lorri, who published their debut YA novel, Skyhorse, through Euterpe–Musa’s YA imprint–in March. I’m really excited to have them here, and I hope you’ll find their thoughts on co-writing and fantasy in general interesting.

And on to the interview…

1. Can you tell us a bit about your book, The SkyHorse?

Sure, and we’ll start by telling you it’s not “our” book. Tovi Taggert – she’s a teenager who lives in Honeysuckle Hollow, Florida – she asked us to write it, and the story’s hers. She wanted The SkyHorse to sound like a novel, though it’s really a how-to manual on flying horses. Tovi says everyone needs to read it, because you never know when a SkyHorse will canter into your life. She wants you to be prepared.

2. Where did you get the idea for The SkyHorse?

From a chicken who hatched five eggs, one of which was a lobster named Ralph…and other assorted nuggets of imagination-fodder: The marvelous horses we’ve loved and lost, newspaper articles of house-eating underground monsters, bits of poetry, images that made us wonder what if. That’s where the fictional elements came from, anyway. Tovi told us the real story. We just embellished her narrative of what actually happened.

3. When did you first realize you wanted to pursue writing as more than a hobby?

Hobby? What is this “hobby”? Joking aside, we never considered writing a hobby. We always wrote for publication. We studied other writers, we read magazines, we learned style and voice, and we wrote, wrote, wrote. We worked our fannies off, and we still do, every day, writing and re-writing and editing and querying and promoting and the thousand other things a writing career requires. Happily, for us, writing is work-that’s-not-work. Dare we say we have lots of fun? We have very trim fannies, too.

4. What is your definition of “writing success” and how close to it do you think you are?

We think success in any venture means doing what you enjoy. So, by our own definition, we’re super-successful. And modest, too.

5. What part of the writing process do you find most difficult, and how do you make it easier for yourself?

Keeping track of the story trajectory during re-writes is tough. Many small actions in the first chapters lead to important decisions later, and changing something that seems inconsequential at the beginning of a story can have a real impact further down the trail. You know – stuff like, she needs to have the retractable dagger in her bra when she meets the killer. Is it still there? To make sure the daggers stay where they belong, we create files of notes and reminders.

6. You’re a mother-and-daughter team. What led to the original decision to work together on your fiction?

Several years ago we began talking about a character we both liked and brainstorming sticky situations for her to stumble into. She evolved into a sleuth, and the sticky situations became short stories. We were delighted to find a talented and generous editor who loved her as much as we did (Hi, Zee!), and who included the stories in a series of anthologies. We just kept going from there, and we feel very fortunate to have found Musa Publishing, whose hardworking staff believed in us and The SkyHorse. (Thanks, Celina and Kathy and Jenn and Kelly and Coreen and Amy!)

7. What does the collaboration process look like for you?

Like an intelligence-gathering operation. First we draft a one or two line sketch. We expand the sketch into action points, arcing through the entire story. From there we tag-team, in covert surveillance style. One of us spies on our character, following along to a natural stopping point. The other picks up the trail, and we swap back and forth until the book is finished. It’s always a kick to see where characters go. Driving black SUV’s with tinted windows is fun, too.

8. Do you think collaborating to create your fiction has created tension in your relationship or made it better?

Umm…neither? There hasn’t been much impact on our relationship. When we disagree, we rewrite. Our writing – now that’s a different story. Collaborating definitely made our writing better.

9. Have either of you considered doing solo work?

We’ve both written solo, and sometimes still do, for contests or non-fiction projects. Writing together is more fun.

10. What are you working on next that readers can look forward to?

When fourteen year old Tovi Taggert moves to Honeysuckle Hollow to take care of her grandmother, she has a hard time fitting in. For one thing, she’s been tagged with the hated nickname Too-Tall Tovi. For another, everyone at Honeysuckle Hollow High believes Tovi played the Choking Game with someone else’s boyfriend – and made out with him besides.

As if she doesn’t have enough problems, after the latest stand-off in the school hallway, Tovi finds a gorgeous speckled egg nestled in a feather lined nest.

She takes the egg home – and mysterious visitors begin appearing almost immediately. Even more worrisome, whatever is inside the egg starts chipping its way out.

As she struggles to return the horse to the magical land where he belongs, Tovi must make a courageous decision – and accept what that decision will cost her.

HL Carpenter is a mother/daughter writing team. Their young adult novel, The SkyHorse, is available at Amazon.com and at the Musa Publishing web site. Read an excerpt of The SkyHorse at www.TopDrawerInkCorp.com.