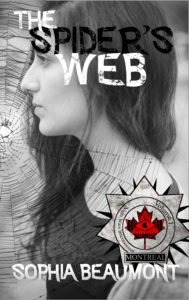 Mental illness is either underrepresented or poorly represented in all genres of fiction, so I’m especially pleased to introduce today’s author, Sophia Beaumont. Sophia’s novel, The Spider’s Web, is the first in a series of YA urban fantasy novels about Evie, a demisexual young woman struggling with anxiety and depression. The book also takes place in Montreal, Canada, and Canadian stories always earn bonus points in my heart.

So, please give Sophia Beaumont a warm welcome!

Can you tell us a bit about your book, The Spider’s Web?

The Spider’s Web is the story of Evie Cappelli. Six months before the story starts, she tries to kill herself and fails. When she wakes up, she has a shiny new diagnosis of depression and anxiety, and the ability to see ghosts. One of them, Micha, says he’s there to protect her. At first Evie thinks she’s completely lost it but eventually, she comes to accept his presence and they become friends. Even if it’s weird, it’s also welcome because she’s just moved to a new city and hasn’t made many friends yet.

Evie’s powers continue to grow, and she starts controlling fibers–which is excellent, because part of her therapy involves a lot of knitting, crocheting, weaving, etc. She sees it as a much more useful superpower than seeing dead people. Her crafts start to uncover bits of her past lives, and Micha’s role in them—and what her powers mean for her future.

What part of the story came to you first?

Two parts, actually. When I first started writing The Spider’s Web, it was before my own diagnosis of anxiety and depression. I was trying to understand what was going on in my own head.

At the same time, I was doing an internship in Montreal and fell in love with it. I wanted to write something that took place there, a sort of love letter to the city. It was my first time completely on my own, and I felt like I should have been having the time of my life, but I was living off of Nutella sandwiches and oranges and completely miserable and I couldn’t figure out why. That was back in 2007. The story has been through many (many, MANY) drafts since then and changed a lot, but the core of the story is still the same: a girl trying to survive on her own, but while also trying to build a support system that’s never been there before.

What was your favourite part of writing The Spider’s Web?

I loved adding in the landmarks and the quirky parts of the city, like the LARP group on Mount Royal. You don’t see a lot of books or tv shows or movies set in Montreal, so I wanted to make sure it really came to life for the readers.

I’m also an avid knitter, so writing about some of the knitting stuff and coming up with odd situations to use it was also a lot of fun.

What was your biggest challenge in getting The Spider’s Web published?

Actually getting it published! Back in 2015, The Spider’s Web was accepted by Torquere Press, and was published in 2016. Unfortunately, Torquere closed six months later without paying a lot of people, myself included. I was devastated when I found out, but a lot of us did see it coming and started working on the next steps. I had a really great contract and Torquere was prompt with providing my return of rights letter, so within about a month I was able self-publish The Spider’s Web on Amazon. My roommate is also a graphic designer and writer, which is fantastic because she’s the only graphic artist I know who takes payment in knitwear, and that was pretty much all I could afford! With her help, I’ve gotten everything that was with Torquere re-published on Amazon.

You’ve also worked on a Night Wars anthology with Missouri Dalton. How was this experience different from writing a novel?

The Night Wars Collection was an interesting experience. I haven’t written a lot of short stories, but this gave me a chance to dive into a few characters I hadn’t gotten to work with much when writing The Spider’s Web. When you’re used to writing 60-90,000 word novels, boiling everything down to 5-15,000 words is so hard! I’m glad I did it though. It made me a better writer, and I got to tell some stories I’ve been dying to tell, like In Defense of Mushrooms–which contains spoilers for The Spider’s Web!

I should also mention that The Spider’s Web is book 1 in the Evie Cappelli series, but it’s also book 6 in the Night Wars Universe. You don’t have to read one series to read the other, however.

How would you like to see representation change in the next 5 years?

It has come such a long way since I started writing this book. Back then, I couldn’t get a diagnosis because everyone kept telling me I was just “oversensitive” or “it’s all in your head,” or “you’re overreacting.” I think we’re a lot more open to the existence of mental illness now and the many ways it can present itself, but there’s still a long way to go. There’s still a lot of stigma involved.

I’m also asexual. When I first heard about it twelve years ago, there wasn’t an asexual spectrum; it was very cut and dried; you feel this or you don’t. So I dismissed asexuallity and assumed I was just broken. Looking back, this played heavily into the impetus to write Evie. One of the reasons I wanted Micha to be non-corporeal was I wanted her to have this very loving relationship, but didn’t want to involve physical contact or intimacy. While her sexuality isn’t explicitly explored in the book, it does come up in later books. She just doesn’t have the spoons or the vocabulary to express it yet in The Spider’s Web.

I would really like to see more ace rep out there. As an ace living with a demi-bi, we’re kind of the “invisible” sexuality, the ones who get erased. We’re here. We exist. We want to be in caring, healthy relationships–just keep it in your pants, ‘kay?

What are you working on next that readers can look forward to?

So much! I’m about to start revisions on Evie’s next book, The Ferrymen, which will be out this fall. The third and final book will follow sometime in early 2018.

I also have a serial novella I post every Wednesday on my blog (that’s also where you can find all the latest release dates, appearances, etc), and two books in or about to be in the query phase. I’ve also got two more books I hope to write this year, so hopefully you’ll be seeing a lot more of me!

Sophia Beaumont is the author of the Evie Cappelli series, part of the Night Wars Universe. She holds a degree in textile conservation, which she hopes to one day put to good use. In the mean time she writes and designs knitwear patterns from her home in Ohio and dreams of traveling the world to discover new yarn shops and book stores.

Did you enjoy this interview? Purchase your copy of The Spider’s Web today!